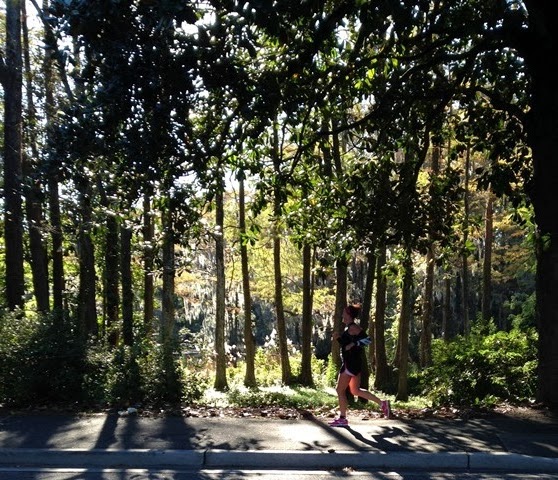 That first out-and-back lap was magical. The sun was out and the temp was perfect. The aid stations were prepped with highly energetic volunteers and the people were out in pockets along the course.

I  loved the new course route. I had run the course twice before - once from the Battleship start/finish and once from the downtown start/finish. Those years included runs over two bridges, twice and in 2012 included a CRAZY - and I mean crazy - triangle loop in the middle of Greenfield Park that was confusing and daunting.  The new layout - even with the PPD spur at the start and the uphill turnaround at mile 13(ish) - was so much better. 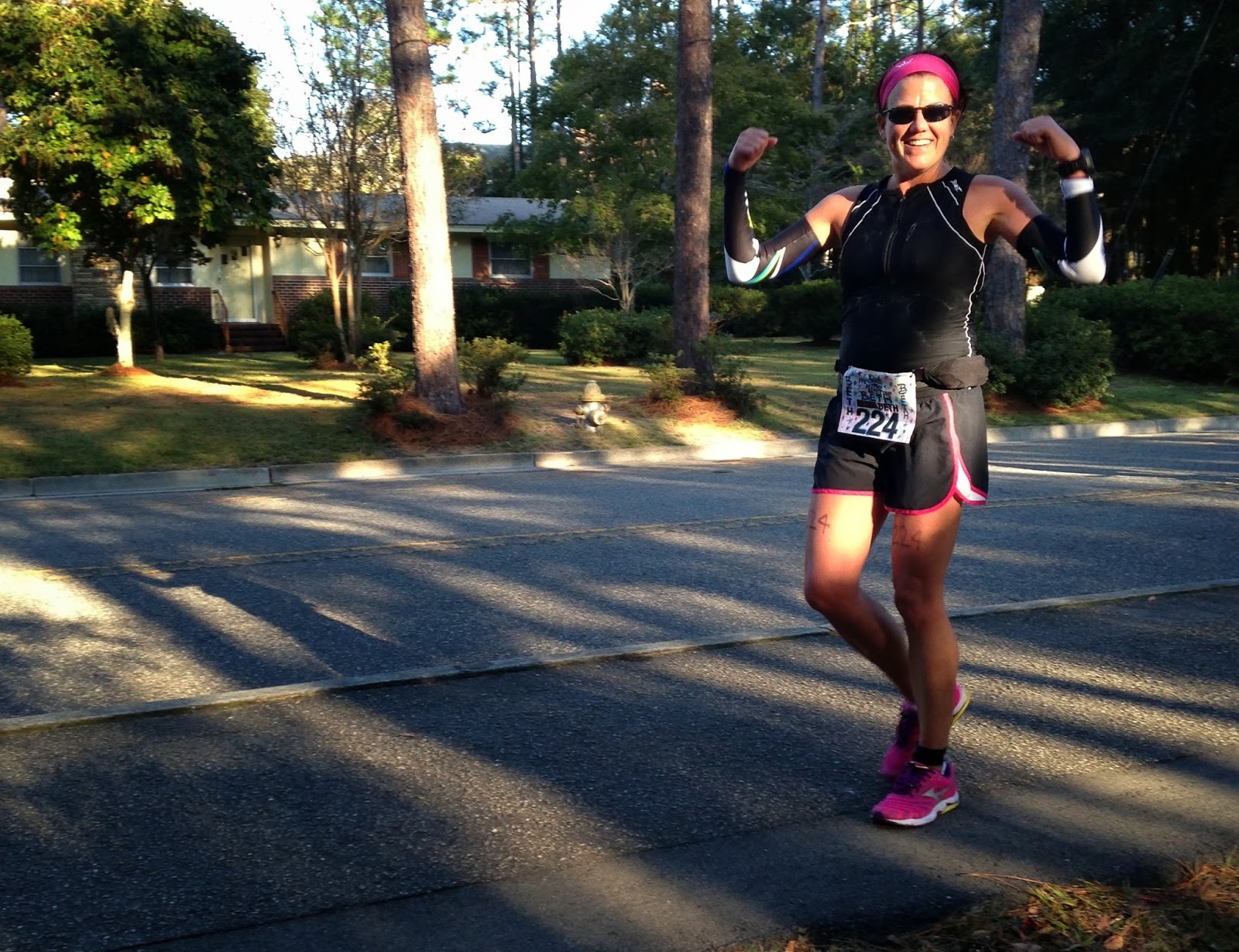 On the way back to downtown, I passed all my friends and fans and family again. My fit center crew - in costume - spurred me on at one of the aid stations. Dad & Joyce were at mile nine(ish). There was a pocket of spectators after that with music blaring, a bonfire in the front yard and a sign that said: TOUCH HERE FOR POWER!  Adam Rose (a friend, owner of TrySports and one of the organizers) escorted me on his bike for a few hundred yards at Mile 10(ish). He admitted he was jealous of everyone out there. It was a perfect day to race. I agreed but still bargained with him to trade places.

I headed out of the park and down Greenfield Street to the roar of a band and my team: tri-clubbers, Ace and Anna. 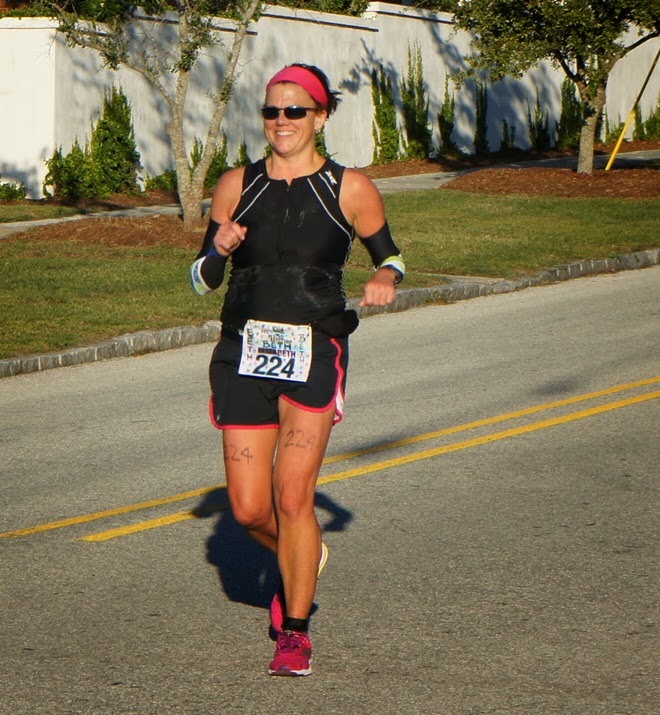 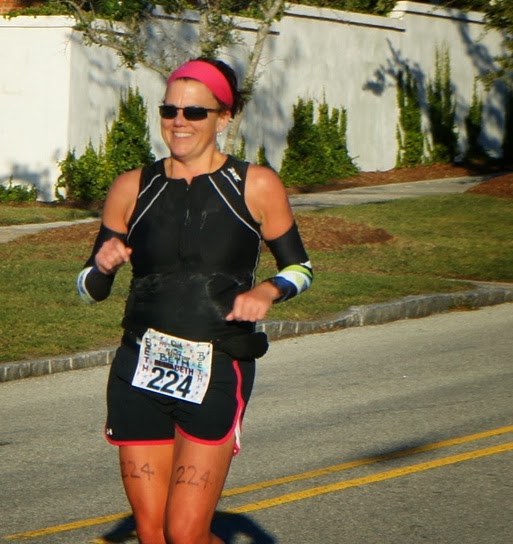 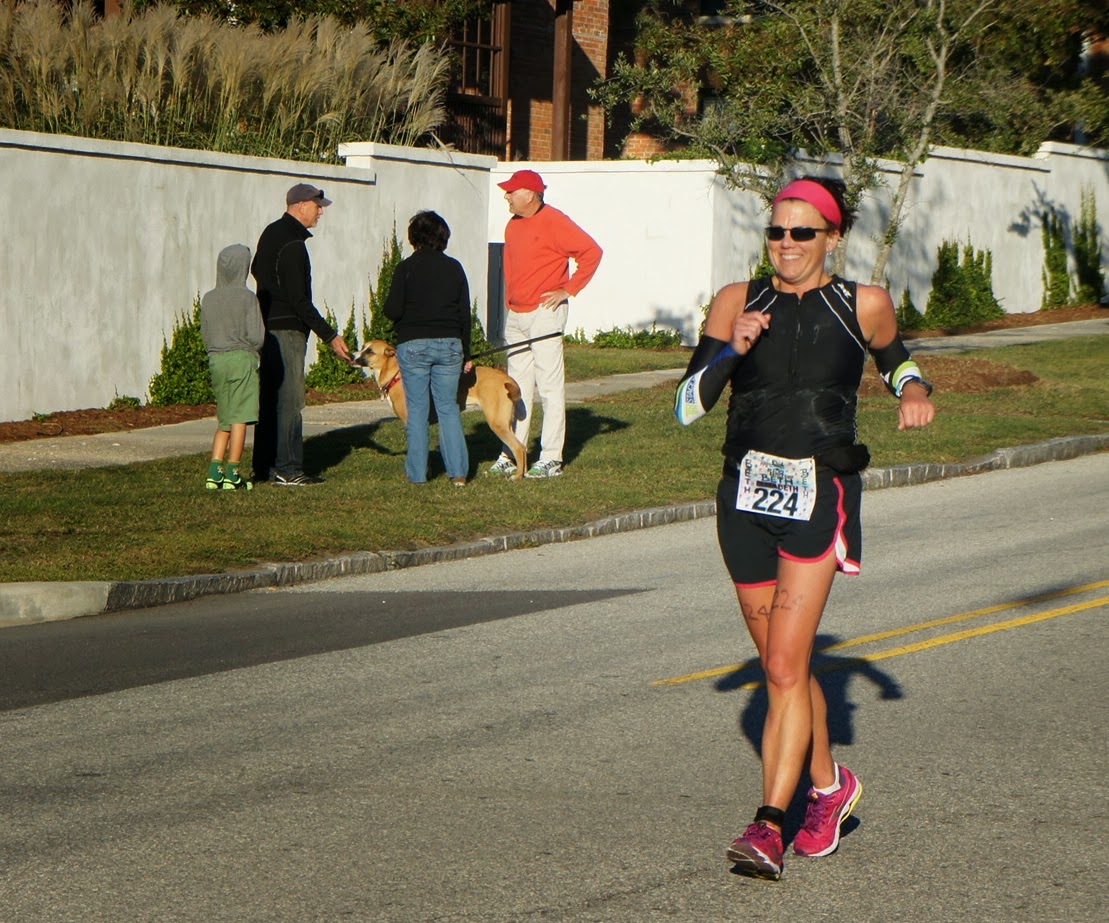 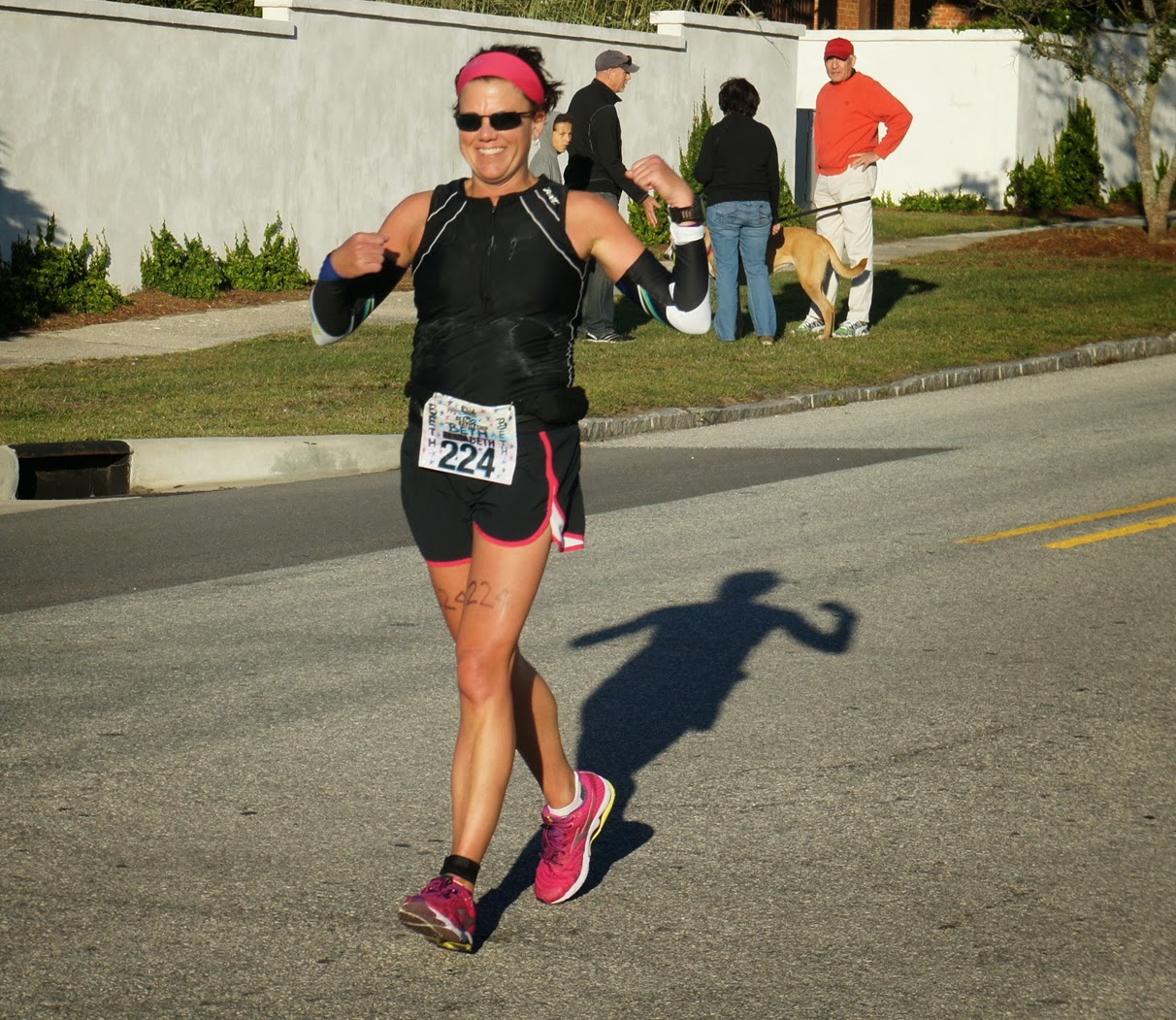 I passed through mile 12 and did a little dance through the Overcomer Station:


I passed the Finish Line and cruised to the turnaround. I missed my coach, but passed her hubby and my TriStacey team at the cone. I stopped at special needs in hopes of a Red Bull. [Note to self: put the cranberry red bull in the run special needs bag next time.] I eyed the Nutella and the gum and I settled for a few big gulps of a fizzy Coke, my long-sleeved shirt and my nutrition bottle for lap two.


I retraced my steps past the Finish Line (tiny bit of torture to know I couldn't just stop there), and the cobblestones on Water Street; walked through the Overcomer Station and past the Satellite Bar.

When I took a right to head into the park, I took a deep breath and faced two facts: one, I was going to be an IRONMAN, I knew I would finish; two: I was not going to finish in my targeted time. I started off half an hour off my target time the moment I touched down from the bike.  My pie in the sky goal of under 12 hours was out. My projected realistic goal of under 12:30 might work, but I would need to follow through on my plan to progress through these last 13 miles - getting a little faster each mile. My last ditch goal was more likely: to get to the finish in 13 hours and by 8:30pm so that Shelley Cavenaugh - one of my best friends from childhood - could give me my medal before her volunteer shift ended.

I did some quick math and pace calculating and a head-to-toe body check. My head was okay, my gut was fine, but my legs hurt - my right Achilles throbbed. I remembered what a wise sage said only a week before the race: ironman is not a math equation (thank you, Sami Winter). I decided not to care about my goals or my watch or my pace or my expectations. Ironman is a heart equation.

I turned my watch around on my wrist and covered it with my sleeve. I decided to run between the aid stations, walk through the aid stations to consume calories and walk/hobble/crawl up or down any ascents/descents because they hurt.

About two miles later, I crossed paths with David Connor again. I was walking up a hill and he was truckin' and headed for a sub-12 hour personal best.  What's this walking all about!? he asked. It was the nudge I needed to get me going again.

I think I had trudged along for another quarter mile when Erica caught me at mile 18ish.  She greeted me with an: I'm feeling much better! and trotted ahead of me. She hadn't gotten 25 yards when she pulled back and waited for me to catch up. Look, she said, I'm not setting any records here. Let's finish this together.

On the back side of the park, she caught me up on her day. She had had stomach issues for most of the bike and part of the run. At special needs, though, she downed a Red Bull and started burping. The gassyness escaped her and she came back to life.

We spent the next few dark park miles chatting-slash-grunting and playing WHAT DOESN'T HURT which was a very quick game. I think we played a version of HIGH/LOW - where we shared favorite and not favorite parts of our race. We walked through the aid stations to take in calories. We alternated between defizzed coke and chicken broth (it didn't occur to me that my vegetarian friend was thoroughly enjoying the soup - I was glad to give her a hard time later). At about mile 22, Dad and Joyce came into view and I nearly cried. I had already passed them three times and fully expected them to be headed to the finish. It was a JOY to see them. 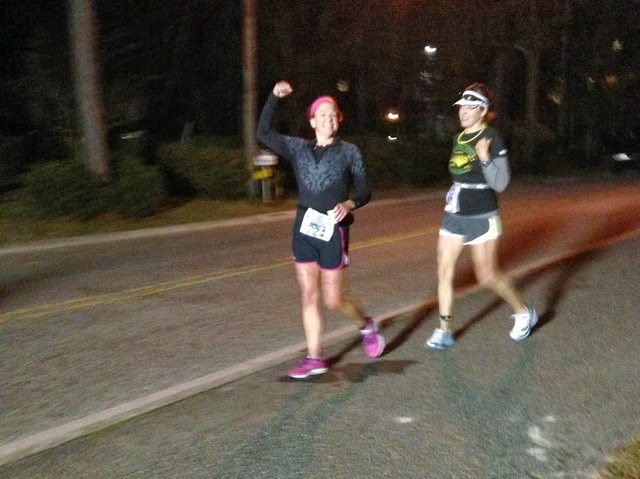 At that point, I made an off-hand comment to Erica about beating Hines Ward at ironman. The football MVP and Dancing with the Stars champ had just completed Kona in 13h:08m:15s.

Erica looked at her watch and did some math and calculated that we could run just over 10min miles and make it back in time. I doubted her calculation but I was game to give it a try. We TOUCHed HERE FOR POWER and ran.

Jen showed up out of the dark on her bike around mile 23.5 She shouted encouragement to us and maybe even sang to us to make us smile and/or grunt and reminded us that we weren't quite running. She yelled: you're looking good. Great job, Girls!  Your jogging looks great! It makes me laugh out loud now because it is a compliment that doesn't sound like one. She will never live it down. We felt like we had picked it up and that we were RUNNING. The IRONMAN shuffle is a more accurate description.

We jogged to mile 24 and hobbled down Greenfield Street. The band was playing These Boots Were Made for Walking and I sang along - and that's just what I'll do - wishing all along that it were true. I had a moment where I swore that Nicole Ferguson was onstage singing - but it may have been iron brain. We trudged down Front Street and under the Cape Fear Memorial Bridge overpass muttering: we can do this to each other.

At mile 25.5, Erica said: this is it. We need to hurry. We walked/hobbled down the steep descent at Ann Street and turned right onto Water Street. We could hear Tim shouting  something and could see the bright lights. There were people scattered on the sidewalks yelling. Some were drunk diners leaving restaurants, some were spectators waiting for their runners.

We hit the cobblestones about two blocks away and heard Tim exclaim: if you can hear the sound of my voice.....you have 20 seconds to make 13 hours! Erica yelled LET'S GO! over the din of the crowd and I whined/assured her:  I'm Coming! 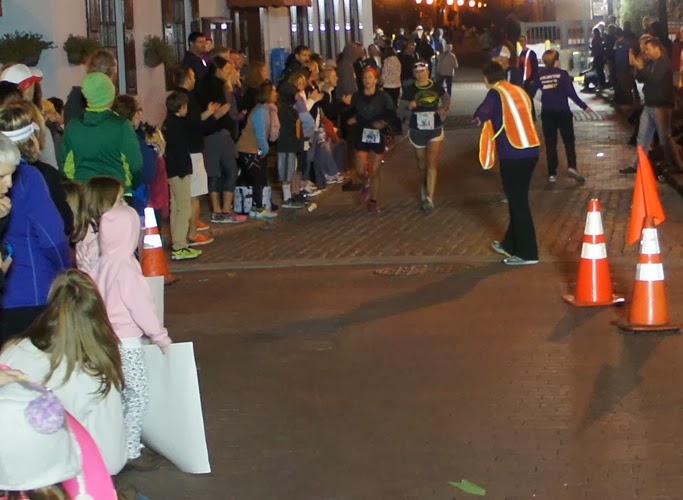 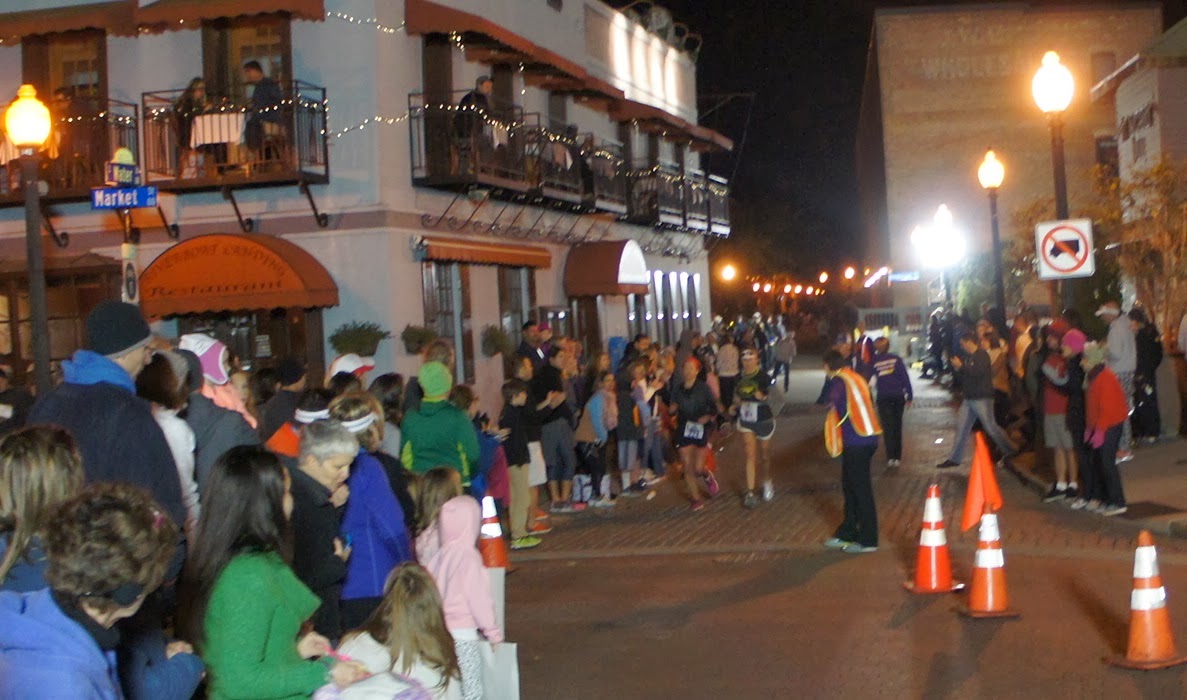 Step for step, we watched our feet to avoid a stumble on the cobbles, we ran through the intersection at Market St., then we were in the finishing chute between the barricades, then we passed Tim, then we were surrounded by bright lights and I was reaching out for Erica so we could cross the finish just as we had started - hands overhead in victory! 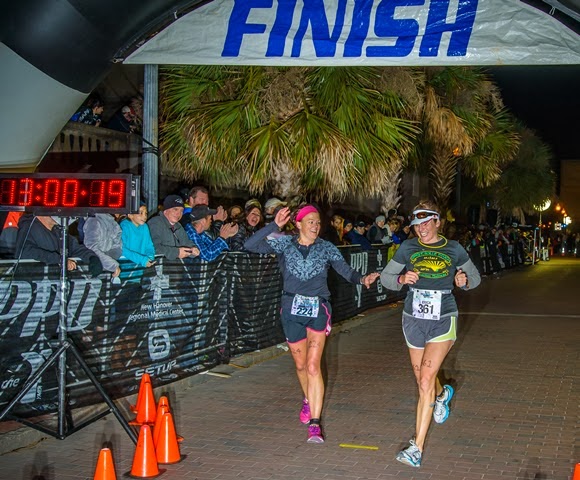 I AM AN IRONMAN!!

Our official time: 13 hours and TWO seconds (despite what that clock says). The moments after that were some of the best in my life. I wanted to cry and shout and sing and dance. But I was too tired for any of it.

Shelley was there to hang my medal around my neck. Neal was there with the biggest hug of all time. Anna, Dad, Joyce, Michelle, Jess and Anne were all there. Jen showed up moments later (after saving a runner's life). 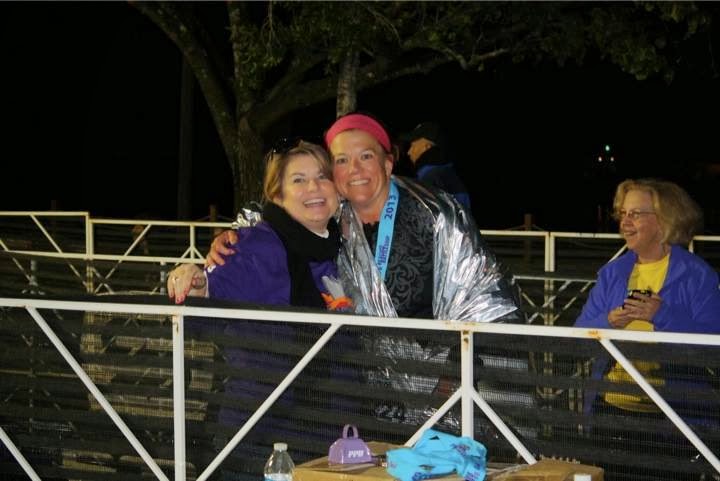 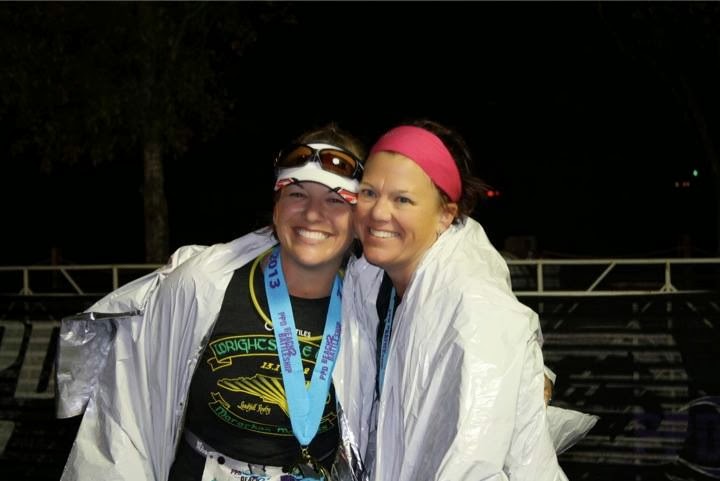 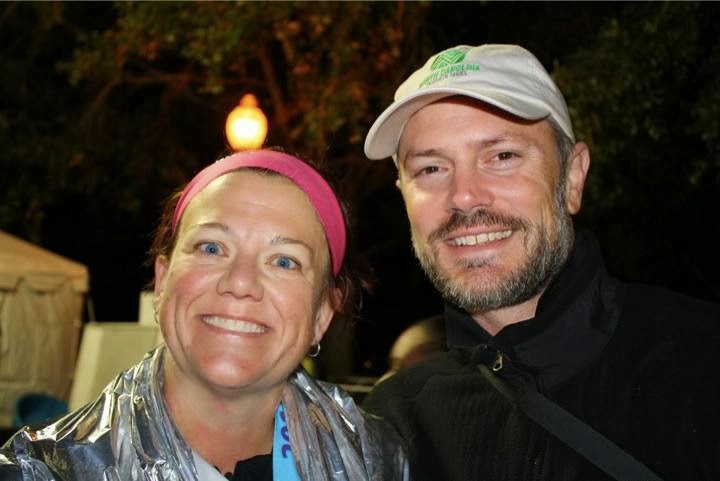 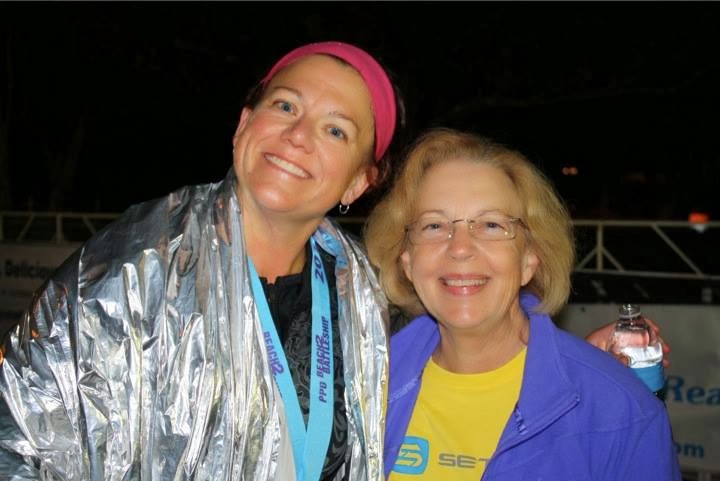 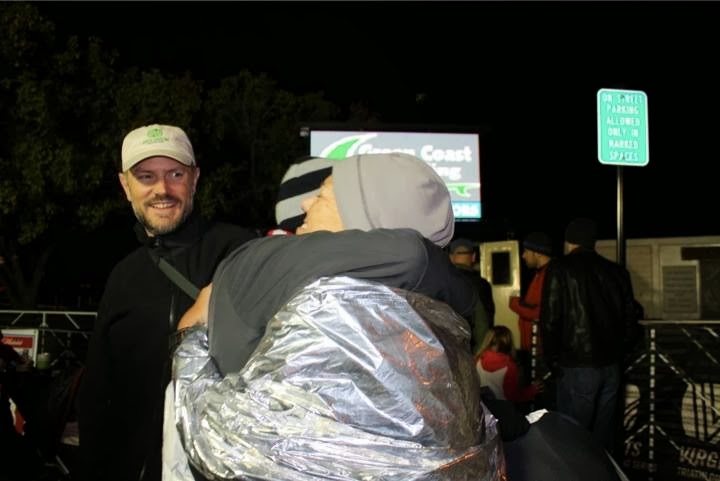