My run was awesome. I did not have a personal best. I did not follow a run strategy. I did not stick to my paces and I didn't draft off other runners. It didn't feel fast or good. I didn't even look cute (my allstar kit was rockin' but, what's up with that hat?). But it was awesome. Here's why:  It was better than what I have been running in practice.

In the three weeks leading up to Azalea, I'd run almost 10 miles. That is not a lot.  Five of those had been that very week. I had been sick with an upper respiratory funk that left me short of breath and coughing for 24 days (but who's counting?!). My longest run in 2015 was 6.65 miles exactly one month prior and my average pace for the past month had been close to a 9:30/mile. That ain't my best!

On race day, I ran 8:30/mile for 3.23 miles (you read that right - the course was long). It was two minutes and 30 seconds slower than last year. But, I knew I was pushing hard and didn't let up. I was focused on my breath and my effort and I pushed myself mentally when I wanted to slow it down. 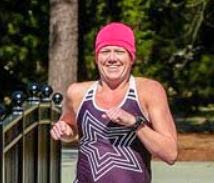 Here's another reason why my run was awesome: I was able to cheer on other runners. I saw Beth and Erin and Jen and Julie and Andrea out there on the course.  I was out there with some of my favorite people and celebrating a race with friends is really the most rewarding part of the race. Before the race, I was chatting with our coach, Lance Tate. Our conversation included the EVERYTHING is AWESOME song from the Lego Movie. Naturally, it was on my mind throughout the race. Over and Over and Over.


But it's true, everything is awesome when you're part of a great team. I am so grateful to be a part of this team and proud of the courage and dedication it takes all the athletes to work, train, study, parent and race. And, it makes me happy to go play after a race: we met at the Mellow Mushroom for pints and pie.

As a wrap-up of Azalea, I will say that my goal is to finish this race in under one hour. Last year was soooooooo close. I finished in 1:00:44 and had my best run ever. It's fun to think that the first time I did it, I finished in 1:28:ish and I've improved so much. But, I'm still shooting for a sub-one hour. Maybe after that, I'll retire from this race.