I'm 14 weeks away from Raleigh 70.3 and 31 weeks away from Beach2Battleship race week! To be exact, as I'm writing this, there are 239 days, 17 hours, 39 minutes and 11 seconds to the start of B2B! I'm on the edge of my first few weeks of prep races. Last week I spent over 12 hours training - including foam rolling, yoga, TRX and pilates (on top of the swimming, biking and running)!

My running buddies joke and muse and try to figure out on nearly every run what has broken in our brain to make us want to do this. Right now, I feel like I'm only half crazy - my focus is on the Raleigh 70.3 (get it? half iron= half crazy) on June 2. I can't imagine what's in store in July, August and September when the bulk of my training for 140.6 miles ramps up.

Ask any iron athlete and they'll do one of two things: deny they're as extreme as the guy above or they'll try to one-up him. Mostly, I deny the fact that I spend so much time training, thinking about training, racing, thinking about racing, eating to train, or thinking about eating. But, after I wrote the schedule below, I faced up to some crazy. For starters: my alarm is set for 4:40am. I usually hit the snooze once and I'm up and dressed and in the kitchen and letting the dog out by 4:58. In short, here's what a typical week of workouts looks like right now:

For those of you who want details:

Monday:  CrossTrain
I coach the YDubTriClub cycle session at 5:45a. Sometimes I ride with them, other times I sip coffee and encourage them to go a little harder. A little later in the morning I  teach an indoor cycling class at the hospital's employee fit center. More than likely, I'm on the bike for an easy 100+ cadence spin. For the past two months, I've added an extra swim on Monday evening - thankfully that has ended!

Tuesday: Swim + CrossTrain
On Tuesdays and Thursdays, I swim with the YDubTriClub. We are a sprint triathlon-focused club, so we work on short-distance speed and techniques. We tackle 2500 - 3500 yards every Tuesday and Thursday. My crosstrain event is another coached spinning class and I'm usually on the bike - using it as a recovery spin with a high cadence

Wednesday: Run (Speed) + Crosstrain
I usually do a track workout that is three-to-five miles. I work on form and high cadence and my repetitions are short intervals. I teach another Spin class at the fit center and then take a basic yoga class.

Thursday: Swim + Bike
Another 5:30am swim with the tri club. This morning, we did 3000 yards.  I add a optional trainer ride in the afternoon.

Fridays are my favorite. I usually do an easy  social run with friends and mix in hills or tempo runs every few weeks. This week we watched the fog roll with the Cape Fear River and the sun rise over the buildings of downtown Wilmington as we crested hill after hill - and climbed the parking deck at PPD. Tempo runs are mid-distance speed workouts. You work on race pace for miles at a time and sandwich it in between easier efforts.

Right now, I'm biking indoors. Last weekend, I stared down a two hour on my trainer. For the past few weeks, three or four other riders have set up in the classroom of a teacher at a local school. She has a projection screen and we've watched Ocean's 11, Bridesmaids, The Long Run and last Saturday, I annoyed everyone by quoting every line in So I Married an Axe Murderer.

Sunday mornings are reserved for the longer run. Last Sunday, I tackled eight miles alone. I set my Garmin up for a progressive run - where I picked up the pace every two miles. I started out a little too fast and cruised through the first two miles. But, when I hit the second pick-up, I couldn't do it. My watch kept beeping at me. Bee-Beep! It actually read: SPEED UP! Every 20 seconds for six miles, I listened to it Bee-Beep! Bee-Beep! Bee-Beep! I have now affectionately renamed it ARGO because for six miles I muttered and cussed at it with lines from the movie ARGO. You know the one.


Wow! The last two weeks have been a whirlwind of workouts and well-timed wisdoms. I'm excited about a few breakthroughs - mentally and physically and in the next few days, I'll try to share them all.


My most fun event was a track workout with Stacey Richardson and my Raleigh 70.3 training buddies. I traveled to Chapel Hill on a chilly, breezy, partly sunny day. I arrived with butterflies in my stomach and left with a big grin on my face. First off, I loved the people. I loved the workout and I loved being back on the campus that I love so much.

I was admittedly nervous about the track workout. I do them almost weekly, but they are self-coached and in the darkness just before dawn. There is a new expectation and accountability when there is an objective set of eyes watching your gait, your effort and your performance in the light of day. Also, I didn't want to puke.

My favorite thing about the workout was that Stacey coached us all - and I think there were close to 20 on the track - right where we were that day. We did a progressive run and set our paces by our last 400 (one lap around the track). We didn't have to aim for a race pace or pre-set goal - we based it on where we were at noon on a Sunday in January.

Stacey gave me some great feedback on my form (practice my toe-off) and offered a ton of new ideas for dynamic warmups and cool downs. Did I mention I loved the people? I met Jess who is rebuilding this year from a scary collision with a bus (and is already falcon fast). I met Jen and two Kims and another gal like me who married a boy from high school.

After the workout, I cooled down by walking through campus. On the way back to the car, I walked by Carmichael gym and realized that the Carolina women were playing the dookies. I decided to pop in, change clothes and watch a bit of the game.

It was a Duke blowout, but I was simply glad to be enjoying some Tarheel spirit. Plus, I got to see Sylvia Hatchell in action once again. [A lifetime ago, I went to her basketball camp. Plus, I did a photojournalism project on her back in 1993!] I visited the student store and rode down Franklin Street just for old times sake. [Dude, Linda's is still there.]

That same weekend,  I attended a multi-sport expo in Durham, NC. I love input and information and so six hours of listening to tips and techniques in the sport I love was a dream for me. There were a few highlights and plenty of lessons learned. 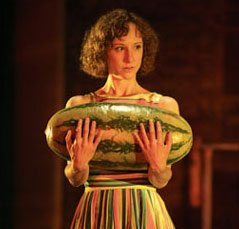 One of my favorite moments was meeting Tim Deboom, back-to-back champion of Ironman world triathlon in Kona. I happened to be sitting back-to-back with him on a bench during a break. I was checking my phone and he was speaking about to someone else about retiring and I recognized who he was. I realized I had a chance to say hello. I turned around and said, "I know who you are! Would you mind signing my shoe?" [I'm such a geek. It felt kind of like a Dirty Dancing moment and later I thought: I carried a watermelon?]

He obliged and we talked for a bit about his keynote address that he was going to give, what he was doing in his retirement and what a crush he has on his one-year-old daughter. I admitted that I had been a fan of his wife before I knew who he was! She created SKIRTSPORTS and I wore one of her outfits in my very first tri!

Here are a few of the notes I took from his message: