Here are some resources for you to use in your quest to live a well-rounded life. I'll be adding more in the coming weeks. Stay tuned for race reports, tips and tricks to use in your training and general articles to keep you fit for life!

Swim Bike Run Taking the leap. The event that started it all: the SheRox Tri in Charlotte 2008.

Puppies & Panic [or Tails and Tales] of my first open water group swim.


SheRox 2008  On Sunday, September 14, 2008, I finished my first sprint Triathlon in Charlotte. I can't believe it's over! Months of training paid off and I finished faster than I projected in each leg of the race. My total time was 2:04:36.

Wrightsville Beach YMCA Tri 2009 I finished my third triathlon in the fall of 2009. What an amazing experience. Each tri experience has been awesome - but this one was unbelievable. The weather was fantastic and I reached all my goals. But, most important, I was surrounded by people who believed in me and helped me reach the finish line.......[read more]

BEST DAY EVER Here is the race report for my first half-iron race:  I did it! I did a half iron distance triathlon! And, I danced across the finish line! 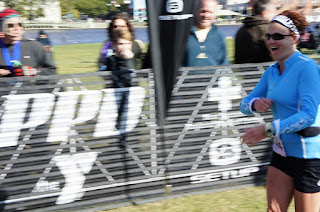 What started as an idea nearly one year ago - finally came true. On October 29, 2011, I swam 1.2 miles, biked 56 miles and ran 13.1 miles in 6h32m56s. It was the hardest challenge of my life....but one of the best days EVER! It was actually one of the best weekends ever - complete with a medal, a cruise on the Cape Fear river, a stack of pancakes with some my favorite champions and memories to last a lifetime........[read more]

MY ONE WORD by Mike Ashcraft & Rachel Olsen 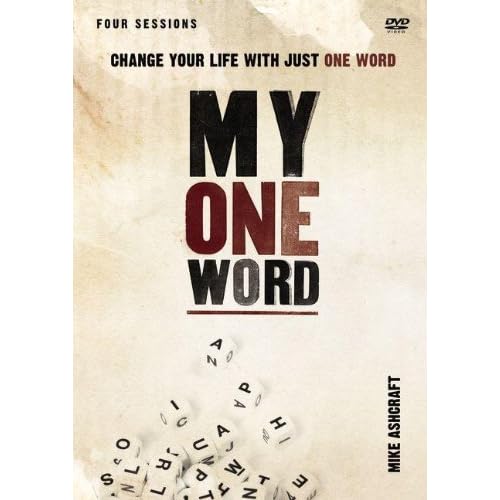 Every year people make New Year's resolutions in an attempt to better themselves. But how many of us are actually able to stick with it? For lasting change, we need to turn to the one who created us---the one knows how to unlock our potential. In this four-session video-based small group study, you will choose one thing---one word---to focus on for an entire year to enact lasting change. By picking one word---a word to represent what you hope he can transform---and focusing with the strength and clarity of your convictions, you will see lasting, sustainable growth through his power over the course of one year. My One Word provides a simple, effective tool for creating personal change at the heart level. Unlock the power of choosing one word to change your life.

A LIFE WITHOUT LIMITS by Chrissie Wellington  In 2007, Chrissie Wellington shocked the triathlon world by winning the Ironman World Championships in Hawaii. As a newcomer and a complete unknown to the press, Chrissie's win shook up the sport. A Life without Limits is the story of her rise to the top, a journey that has taken her around the world, from a childhood in England, to the mountains of Nepal, to the oceans of New Zealand, to the trails of Argentina, and finally, across the finish line.  Wellington's first-hand, inspiring story includes all the incredible challenges she has faced - from anorexia, to near-drowning, to training with a controversial coach. But to Wellington, the drama of the sport also presents an opportunity to improve people's lives.

IF YOU WANT TO WALK ON WATER, YOU'VE GOT TO GET OUT OF THE BOAT by John Ortberg
You’re One Step Away from the Adventure of Your Life! John Ortberg invites you to consider the incredible potential that awaits you outside your comfort zone. Out on the risky waters of faith, Jesus is waiting to meet you in ways that will change you forever, deepening your character and your trust in God. The experience is terrifying. It’s thrilling beyond belief. It’s everything you’d expect of someone worthy to be called Lord. The choice is yours to know him as only a water-walker can, aligning yourself with God’s purpose for your life in the process. There’s just one requirement: If You Want to Walk on Water, You’ve Got to Get Out of the Boat.

THE CAROLINA WAY by Dean E. Smith
For forty years, Dean Smith coached the University of North Carolina basketball team with unsurpassed success. Now, in The Carolina Way, he explains his coaching philosophy and shows readers how to apply it to the leadership and team-building challenges they face in their own lives. In his wry, sensible, wise way, Coach Smith takes us through every aspect of his program, illustrating his insights with vivid stories. Accompanying each of Coach Smith’s major points is a “Player Perspective” from a former North Carolina basketball star and an in-depth “Business Perspective” from Gerald D. Bell, a world-renowned leadership consultant and a professor at UNC’s Kenan-Flagler Business School. The keystones of Coach Smith’s coaching philosophy are widely applicable and centrally relevant to building successful teams of any kind.

YOUNG WOMAN AND THE SEA: HOW TRUDY EDERLE CONQUERED THE ENGLISH CHANNEL AND INPSIRED THE WORLD by Glenn Stout

In 1926, before skirt lengths inched above the knee and before anyone was ready to accept that a woman could test herself physically, a plucky American teenager named Trudy Ederle captured the imagination of the world when she became the first woman to swim the English Channel. It was, and still is, a feat more incredible and uncommon than scaling Mount Everest. Upon her return to the United States, "Trudy of America" became the most famous woman in the world. And just as quickly, she disappeared from the public eye.
Set against the backdrop of the roaring 1920s, Young Woman and the Sea is the dramatic and inspiring story of Ederle’s pursuit of a goal no one believed possible, and the price she paid. The moment Trudy set foot on land, triumphant, she had shattered centuries of stereotypes and opened doors for generations of women to come. A truly magnetic and often misunderstood character whose story is largely forgotten, Trudy Ederle comes alive in these pages through Glenn Stout’s exhaustive new research.

UNBROKEN: A WORLD WAR II STORY OF SURVIVAL, RESILIENCE & REDEMPTION by Lauren Hillenbrand
In her long-awaited new book, Laura Hillenbrand writes with the same rich and vivid narrative voice she displayed in Seabiscuit.  Telling an unforgettable story of a man’s journey into extremity, Unbroken is a testament to the resilience of the human mind, body, and spirit.
On a May afternoon in 1943, an Army Air Forces bomber crashed into the Pacific Ocean and disappeared, leaving only a spray of debris and a slick of oil, gasoline, and blood.  Then, on the ocean surface, a face appeared.  It was that of a young lieutenant, the plane’s bombardier, who was struggling to a life raft and pulling himself aboard.  So began one of the most extraordinary odysseys of the Second World War.

The lieutenant’s name was Louis Zamperini.  In boyhood, he’d been a cunning and incorrigible delinquent, breaking into houses, brawling, and fleeing his home to ride the rails.  As a teenager, he had channeled his defiance into running, discovering a prodigious talent that had carried him to the Berlin Olympics and within sight of the four-minute mile.  But when war had come, the athlete had become an airman, embarking on a journey that led to his doomed flight, a tiny raft, and a drift into the unknown.

Ahead of Zamperini lay thousands of miles of open ocean, leaping sharks, a foundering raft, thirst and starvation, enemy aircraft, and, beyond, a trial even greater.  Driven to the limits of endurance, Zamperini would answer desperation with ingenuity; suffering with hope, resolve, and humor; brutality with rebellion.  His fate, whether triumph or tragedy, would be suspended on the fraying wire of his will.