I am so thankful for everyone who made this year's journey to ironman the best experience ever. I mentioned in a previous post that the number of miles was outmatched only by the number of people who supported me in the days and weeks leading up to Beach2Battleship.

The night before B2B, he sat on the floor beside me as I foam rolled and stretched. I mentioned that I was a little nervous and he said that no matter what - he was proud of me. [Which made us both cry] His race plan: when the miles feel impossible and I might want to quit - to think of all the people who love and support me. Those who ask me how and why I do what I do and those who encourage and motivate me.

I've been thinking about ya'll ever since.

Of course, I am most thankful for him. He's been here through it all. He was there when I launched this crazy idea to him last December - sitting at a sushi spot - and we analyzed all the pros and cons of doing B2B. He endured my months of training. He put up with all my early morning alarms (4:40a most mornings) and my early evening bedtimes (horizontal by 8:45p). He shared his staycation with all of my triathlon friends. He worried about me being on my bike and in the ocean.

I was gone so many Saturdays and for quite a few weekend events. He had to take care of Sugaree and hold down the fort. He was patient in September and October, when I was riding five-plus hours, then running, then driving home from Johnson's Corner, Mt. Olive or Emerald Isle. He listened to my whining and my excitement (which can be shrill and incomprehensible when I am pumped up from a good swim/bike/run!).

But, he also shared a lot of this year with me. Tri Club, ocean swims and even a half iron - he was a relayer for Raleigh 70.3. He was my biggest fan, and I often overheard him telling others about my race. He sent me a note almost every Monday encouraging me, congratulating me and motivating me. Here is what he wrote the week before:

You are almost there!  You have been amazing to watch during your training for the race!  You have been so dedicated and worked so hard.  There is zero doubt in my mind that you are going to have a great race.  I cannot wait to see you fly across the finish line.

There is no way I could have made it without him. On race day, he was EVERYWHERE. He drove me (and Jen and Erica) to transition and then to the swim start. He was at the swim finish, out on the bike (twice), at T2 and I saw him on the run five times plus the finish! I keep thinking of him yelling RACE DAY! YEAH! Guess what Day. It. Is!?

I knew he loved me when he helped me put on my FINISHER PAJAMAS and walked me to the car. His support makes me love him more each day. I am lucky to have him by my side!

I must thank my training buddies: Jen and Erica. I spent more time with them than I did with Ace this year. The three of us spent HOURS together every Saturday. We were all on different plans but trained together. We'd meet during the week when we could for open water swims in Banks Channel or runs downtown.

We spent every Saturday chasing each other on bikes.   By September and October, we had to get out of town. We were taking road trips to the aforementioned Johnson's Corner, Mt. Olive and Emerald Isle. That meant we would wake up at 4:00am. Meet at 5:00a. Drive....somewhere. Ride for five to six hours. Maybe run. Cool down and stretch. Drive back to the start. Make Jen cook us waffles or head to the pub for a  glass of wine. And then go home.

We made two race road trips together this year, including a three day trek to Williamsburg for the Patriots half iron. 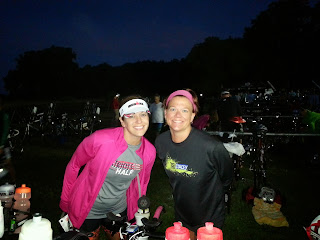 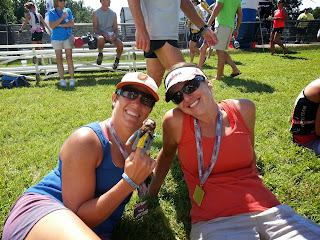 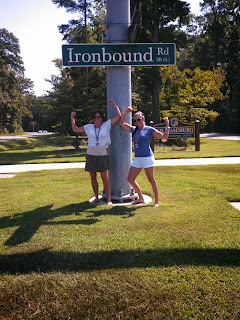 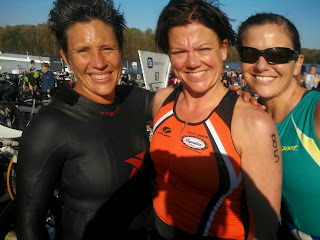 We have seen each other at our worst.  If you want to really know a friend, take her on a trip where she will get hurt, sweaty, dehydrated, and mad at her performance. You will see her cry, cuss and (want to) quit.

We saw each other at our best. If you want to really know a friend, go on a trip where you will get hurt, sweaty, dehydrated, and mad at your performance. You will cry, cuss and (want to) quit. Your friends will encourage you, find a solution and build your confidence. They will make you laugh and sing. I saw them perservere, overcome and excel - and they helped me do the same. 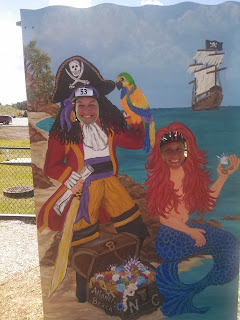 We were completely silly all summer long. I took every experience and every story of training into my race and for 2.4 miles on the swim and 112 miles on the bike and 26.2 miles on the run - I was able to remember the fun that we had leading up to this ultimate adventure.

I will save my favorite story of Erica for my race recap next week. I'll just say that I want this woman on my side through thick and thin. She is as tenderhearted as she is tough (dude, she's an iron woman and she drives a monster truck). I love her.

Jen didn't race with me, but like Ace, she was everywhere on race day. She took us out to the swim start and like every other Saturday, her excitement was contagious. She was on the bike course near her house. She was on the run (at the aid station that she organized). One of my favorite moments was hearing her yell at the top of her lungs at mile 2, 12 and 14: HERE COMES MY COACH!!! Look at her go! I could hear her every time before I could see her - which is the case a lot of the time. 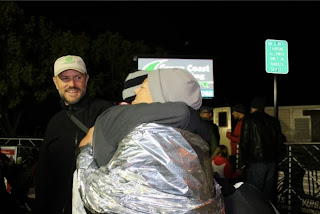 She is one of the main reasons I even attempted this distance. She has done B2B twice before and made it look - like she makes life look - fun and joyful. This is one reason she is my hero and I love her for it.

I want to thank my sister and dad and Joyce. Let me start by saying that Anna was the only one in our family to do more miles than me that day. She flew in from a vacation from the Dominican Republic on Friday, stayed up too late on Friday night (damn not-a-decaf-cupojoe) and drove from Raleigh to Wilmington on Saturday morning. She was out at two spots on the bike - although I didn't see her standing there with Dad and Joyce! 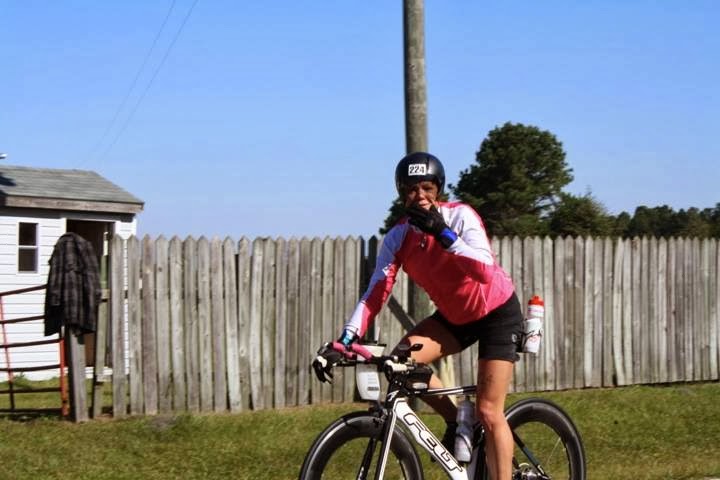 I was so relieved and excited to see her at mile 54 on the bike. She had planned to surprise me - but knowing that she was going to be there was actually better. I had something to look forward to and someone warm to hug! She was carrying a sign that Parker made and taking pictures at the same time.

After that, I started thinking of all the ways I am thankful for her. Aside from being an incredible sister, she is a hero to her husband and son. She is an inspiration and I am often amazed that she fits in work, raising a family, having fun and being fit. 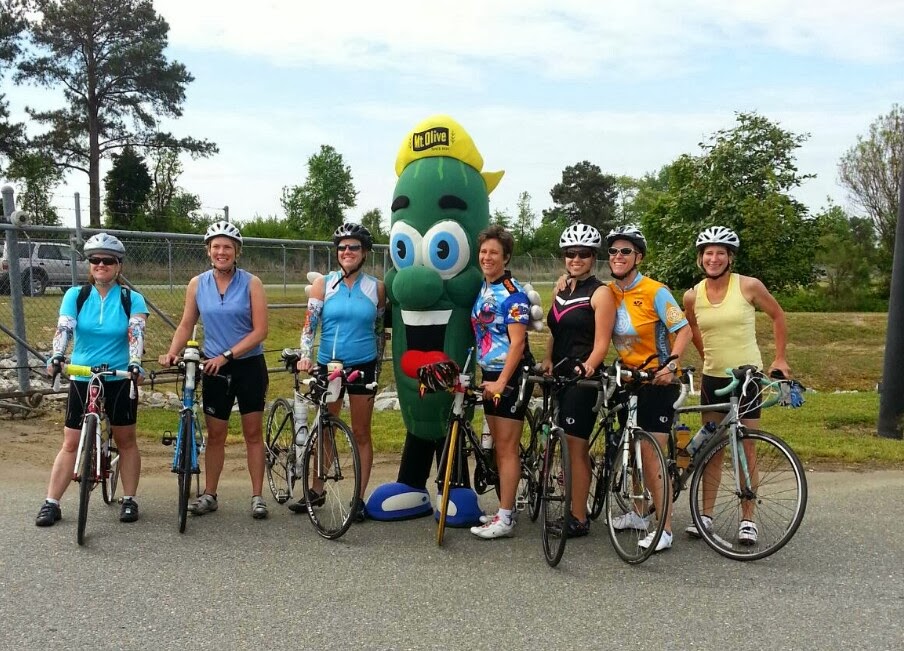 When I got worried on the bike at mile 90 - knowing that I was facing miles that I had never ridden - I remembered that Anna had gone the extra mile earlier this year at the pickle ride. She had joined our group and intended to do the 50-mile option. Somehow, we encouraged, cajoled and (dare I say) manipulated her into the 75-miler. In the last miles of that ride, she and Jen and I played Alphabet Game: Rock Band. I wasn't surprised that she finished, but I was proud of her tenacity.

My favorite video clip of the race is one without me in it. It's Anna walking to the finish chute with the video still on:

I want to thank my dad and Joyce for their support throughout the year. They always asked how I was doing, where I had been, what I had seen. Dad called me in October - after a reaaaaallly long, hard day of training and left a message about a Canadian woman took a wrong turn during a half, ran the full marathon BY MISTAKE and qualified for Boston in the process. He said, "she claims she was in the zone. May all your races be in the zone."

They sent me cards: 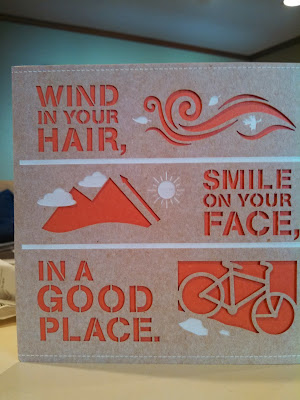 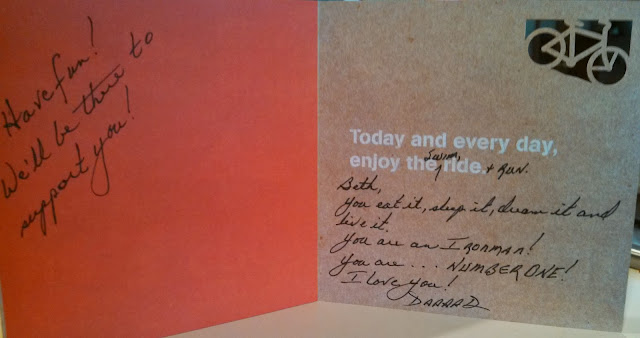 And of course, they were out there on my big day. I was surprised to see them at Mile 30ish and again at mile 75ish on the bike.  They took a million AWESOME pictures! 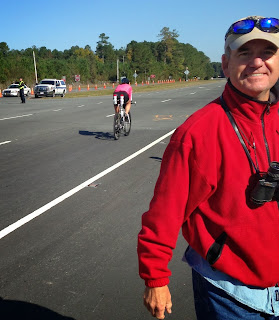 I was REALLY surprised on the run course. Not that they were there - but that they were there EVERY TIME I PASSED.  I nearly cried when I saw them the last time in Greenfield park. Erica and I were jog/walking at that point. I expected them to have left their post in the cold and dark and headed to the finish line. They were there, though! Hanging out in their camp chairs, cheering as we rounded a curve! "Look it's Mommy and Daddy!" I felt like a little kid! They inspired me with their love and thoughtfulness.

I owe a huge debt of gratitude to my coach, Stacey Richardson. She was amazing through the whole process. At the beginning of the year, I attended a seminar that she gave called: MAKE THIS YOUR BREAKTHROUGH SEASON. She gave me my breakthrough season. She prepared me physically and mentally for what was to come. She knew when to push and when to back off. She knew when to encourage me and when to correct me.


Her voice echoed in my head on every swim, bike and run and throughout the race. Here are some basics she taught me:

Swimming is a Dance

Work with the Wind to Win on the Run

And, because you know I like metaphors, I would argue that everything she emphasized in triathlon was a key to living a breakthrough life. [Sounds like a good post for the new year!] 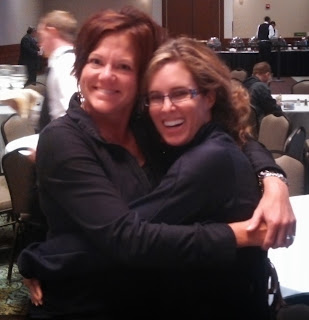