I mentioned in my last post that since Beach2Battleship, I've been working on training of a different kind: endurance goofiness. I'm pretty sure I'd earn a medal for it. The first stop, appropriately, was Goofy Golf in Panama City Beach, Florida.

On the Monday after Ironman Florida, Dirty Spice and I kicked out all the other Spices and headed down the beach for the most famous putt putt place on the Panhandle (great alliteration, right?). Jen had spotted it on the bike course and insisted that we go.

According to their site, Goofy Golf opened in 1959 and remains a family-run stop that boasts two 18-hole courses. In the heat of the season:

The evening lighting includes the glowing eyes of giant monkeys and dinosaurs! There are giant statues that can be climbed for a view and others you can go inside. It’s mini golf with a bonus play-land! 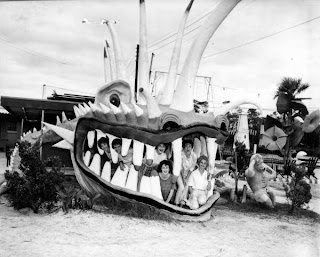 Let me preface this adventure by admitting that there were mimosas involved. And a wager. So, naturally, our first stop was another PCB attraction: Ms. Newby's. This gem opened in 1975 as a package store and bar. A few years later, Newby's added a drive through feature.

We ordered a bottle of champagne and orange juice from Ms. Newby herself. We popped the cork and mixed both in a Nalgene bottle.  We headed west down the strip and arrived at our destination.  On the way, we formulated our wager: winner, winner, big steak dinner. The L-O-S-E-R had to buy a steak dinner with all the fixin's.

To our utter despair, Goofy Golf was closed. Boarded up. We jumped out of the car and onto the magnificent old-school course. As promised: a playland and golf in one.


We were devastated. Heartbroken. But, right about then the aforementioned mimosas kicked in and made us smart.  Stay tuned for tomorrow's episode: how to McGyver your own set of golf clubs.

CLICK HERE
FOR THE NEXT EPISODE OF GOOFY GOLF: LOST IN SPICELAND
Posted by bess andrew at 5:08 PM