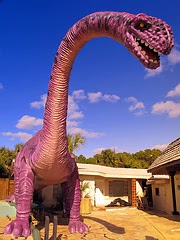 And now for the thrilling conclusion of Goofy Golf: Lost in Spiceland! If you missed the prequel, check it out HERE and HERE! At the end of round one, it was Dirty Spice: 1, AllSpice: 0. We decided that it would be a shame to miss out on course number two. Good Life Choice. The only thing better than Course No. 1 and it's walk-through cave, Russian roulette wheel, giant anaconda and the belly of a brontosaurus was........

...COURSE NO. 2!!!!  It may have been because I MASTERED the course and also.........did I mention that there was a mimosa involved? Either way, this course was awesome. It started with the aforementioned Allie-Gator, whose mouth opened and closed thanks to us. The second hole was a castle, guarded by a bearded ogre that opened and closed the castle gate!  And by ogre, I mean one of us opened and closed the gate. 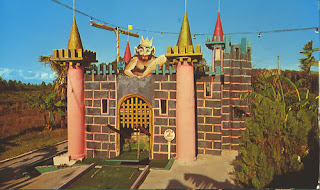 This course also included a windmill, the Buddha, a T-Rex and what we deemed must have been Herman Melville's inspiration for Ahab's ship.

Did I mention I mastered this course? I was ahead (finally) by five strokes when we rounded the corner to the last handful of holes. When what to our wondering eyes did appear the most magnificent feature: a model of the Easter Island Moai.

That Moai stole my MOJO! So, by mastered I mean massacred the course. The next hole we faced was OCTOKILLER.  I lost four strokes on the loop-dee-loo and Dirty Spice maintained her score.


On the last holes we traded strokes and ended up tied at hole 17! Now, if you know anything about mini-golf, you know that if you play number 18, the ball disappears down the drain and your game is over. In our case, the last hole was down the green, through a gate, up a ramp-slash-tongue and into the mouth of a snake. Any ball within a foot of the snake's tongue was lost forever and no real winner could claim her steak.....I mean stake.......as winner. So, we improvised. We decided to play: THE WINDMILL. [Insert dramatic duhn, duhn, duhn music here!] I think (did I mention there was A mimosa involved?) we flipped a coin to see who would be the first putter and who would turn the blades of the mill. I lost the toss. Dirty stepped up AND MADE A HOLE IN ONE! I felt the pressure, stepped up to the tee and putted. I hit the turning blade and my ball bounced right back and landed at my feet. Game. Over.  I cursed the Moai and shed a tear of defeat.


We recounted our steps out of Goofyland, aka Spiceland, and back to the parking lot. As we were packing our shovels and not-lost balls into the car, a good-looking family pulled up and realized, to their disappointment that Goofy Golf was closed. We felt their pain. "Did ya'll bring your own clubs to play?" they asked. We grinned and said, "Well, we improvised."

And with that, we jumped in the car and headed to a steak joint....my treat.

On the way back to THE MOONSPINNER, we happened upon another classic attraction on the PCB strip: JAWS. And by Jaws I mean Moby Dick. This amazing place gave Alvin's Island a run for their money! Not only did they offer beach wear, swimwear, airbrushed items and henna tattoos, they also had live alligator feedings and a shark feeding!

Naturally, we had to stop.

THE END
Posted by bess andrew at 2:21 PM