Here's how it all went down. You may remember that the Carolina Beach Double Sprint was followed up a week later by one of the craziest things I've ever done: a double century - a 200 mile bike ride in two days. I recovered for a week with lots of swimming but a week later I added an extra strength session, power yoga and some tweaks to my run form. On the last Thursday night in May I pulled an AllStar team together for the Wilma Dash - an all-women's 5k. We were decked out in stars and glitter and skirts and tutus and more.  It was a great way to spend a Thursday night. 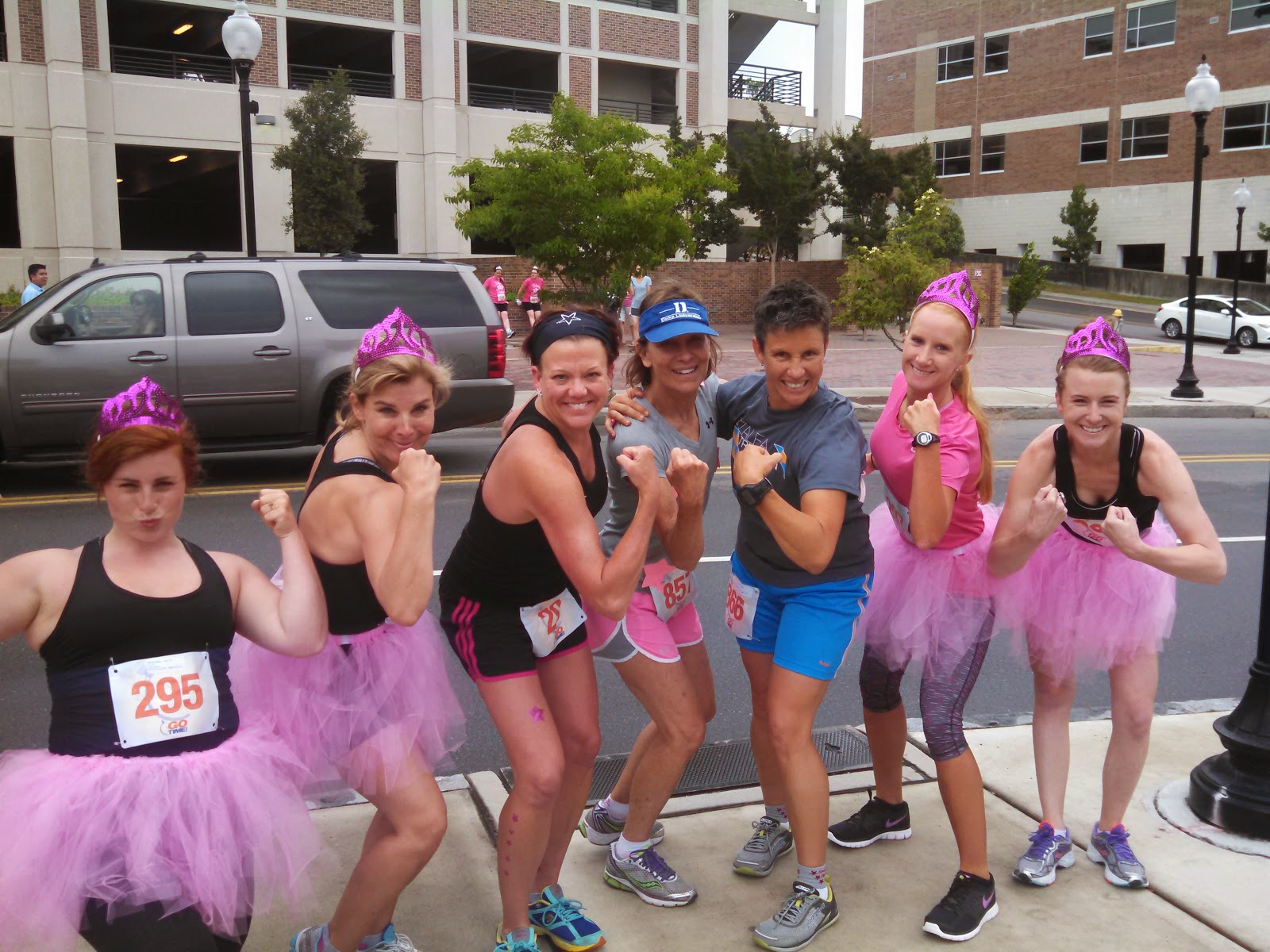 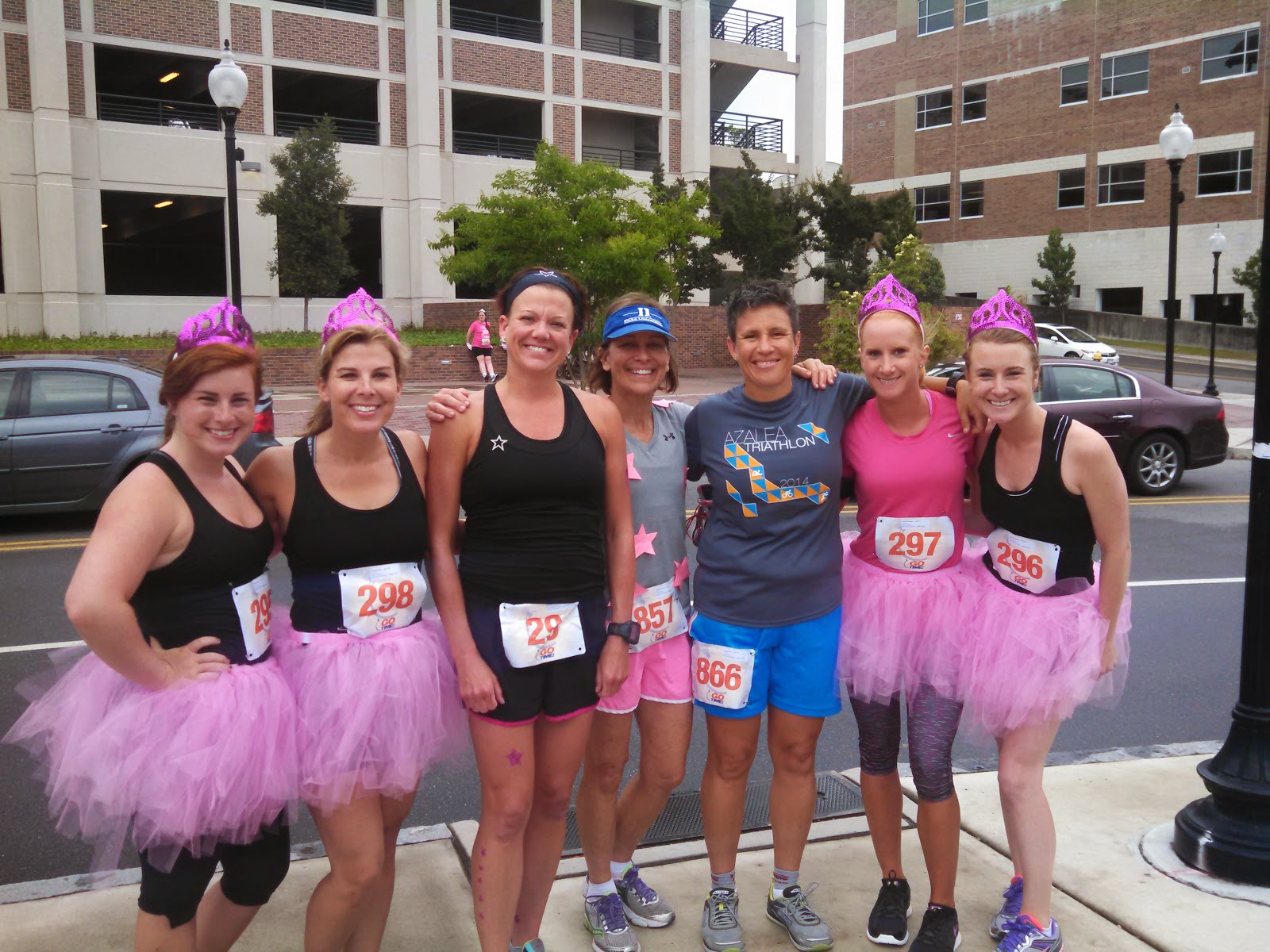 We took a team picture and I headed to warm-up. I jogged/walked down the street. I did my side-to-side dynamics. A half a block later, Sunshine Spice and I turned toward the river and I said: let's do the skippy bound things first because I hate them. Skip. Skip. BOUND!

When I took off on my right leg, I felt like I'd been shot. I folded in half in pain and tried not to crumple to the asphalt. I knew right away that it was more than a muscle cramp. I couldn't put weight on my forefoot, my calf was instantly swollen to twice it's normal size and I felt like I might throw up. My calf muscle was torn.

The pain took my breath away. I assured my team I'd see them at the finish and as they took off for the start line, I sat on the curb and cried a little. After they started, I went into the expo. I stopped by the TrySports Wilmington booth and whined and cursed and moaned and groaned to Scott and Adam and Kristin at the nearby WithoutLimits booth.  They let me hide, elevate my foot and foam roll my calf. As the finishers rolled in, I hobbled out to the pier to cheer on my team. In the end, the AllStars helped me back to the expo where I sat in the corner with my leg elevated, my calf smashed onto a dripping bag of ice. My team kept me fed and hydrated - with wine to dull the pain.

Here are some of my notes along the way.

Friday: May 30
I am sick to my stomach. I'm so sad and disappointed. I drove to Raleigh with a compression sock sandwich on my leg - sock + ice + sock. Walking like a penguin or Charlie Chaplan.


Sunday: June 1
Spent the day cheering for my AllStars with Erica all day. I almost cried when she saw me limping around. Oh, Honey, she said....and I knew it was bad. She's a P.A. and has seen all sorts of injuries. When she suggested going to the doctor, I knew I was in trouble. 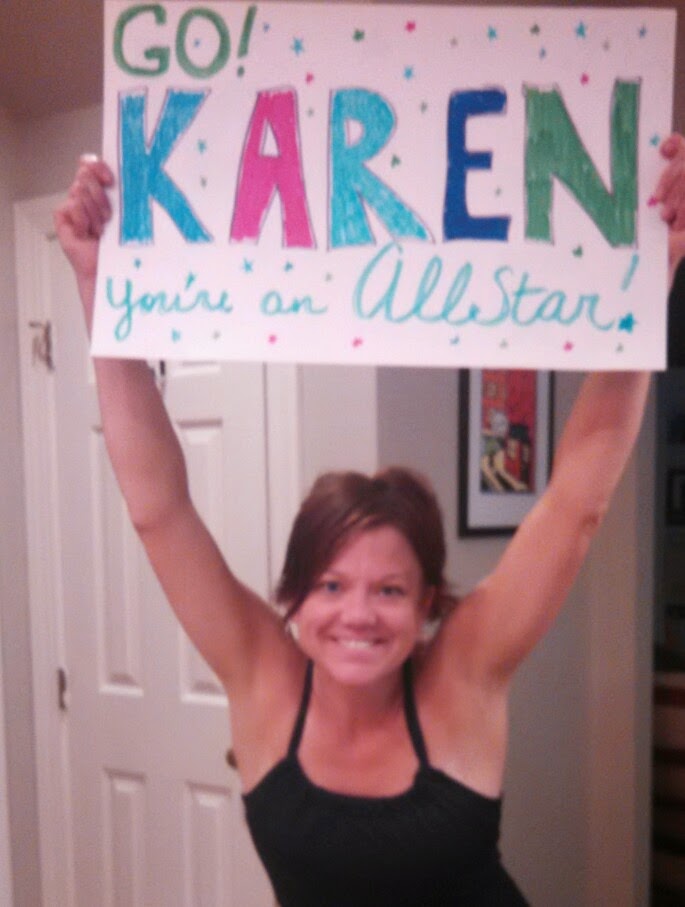 Monday: June 2
I wake up crying. All that time on my feet yesterday means pain today. As Ace was stretching after a run, I stretched out on my yoga mat beside him and sobbed. I'll never be able to run! Why did this happen? I was in the best shape ever! This isn't fair.   Wah Wah Wah.

8:20am. I'm waiting to see the doctor. I don't want to be here but it's the responsible thing to do. If my athletes faced this same predicament, I would insist on a great doctor and a definitive diagnosis.  The definitive diagnosis was just as I expected: grade two calf strain. No running for four to six weeks.

Tuesday: June 3
I survived a 3200-yard Lance swim without kicking. And I pushed off the wall with my left leg only.

Saturday: June 7
I've spent most of this week sleeping including two hour-long naps yesterday. Part of it is physical, most of it is mental. I'm sad. I was doing so well. This was going to be my fastest year ever. Now all my run progress is lost. I'll never run again!


I woke up this morning at 5:00am for the second annual celebration swim at Banks Channel. I arrive early and limp to packet pick-up. I try to hide my injury from my tri-buddies, but meet up with Rebecca in the Blockade Runner bathroom. Girl! I know what you mean, she assures me. You may remember that she was the one at the Azalea tri in 2013 who calmed me, loved on me and made me feel better about pulling out of that race. She shared her story of an arthritis-type ailment and assured me that this wasn't a forever thing. She encouraged me to embrace the break. I hope to rally and someday perform amazing feats like she does (like qualify for Age-Group Nationals).

I limped into the water and swam without kicking for 1.2 miles in a slack current. I had to walk backward up the beach and across the timing mat at the finish to avoid more pain and strain in my calf. I still finished in 31:14 and finished first/fifth in my age group. I was very pleased.

I've added a very sexy accessory for my recuperation. I'm wearing it at night - to keep my foot flexed and stretched. I borrowed it from a friend who did the same thing to her calf (both at the same time!) a while back. When she went to the doctor, he told her it was a common middle-age injury. We both agreed that that comment probably hurt worse than the muscle tear.

Saturday, June 15
I'm still sad about my injury. I won't lie, I'm grieving. I can see the cycle - I am well-versed in shock, denial, anger, depression, bargaining and acceptance. Today I had my first flash of acceptance. I did a fun swim > to > bike transition and had a blast with Jen, Renee, Ty and Jon. Somewhere on North Lumina with the sun coming up and the wind whistling through my bike helmet I thought: this isn't so bad. If worse becomes worse, I can swim and bike. This feels amazing!

Thankfully, I'm turning the corner mentally. I've gone from OH, I'LL NEVER RUN AGAIN! To: Hey, I like not running. I'm starting to enjoy my recuperation. 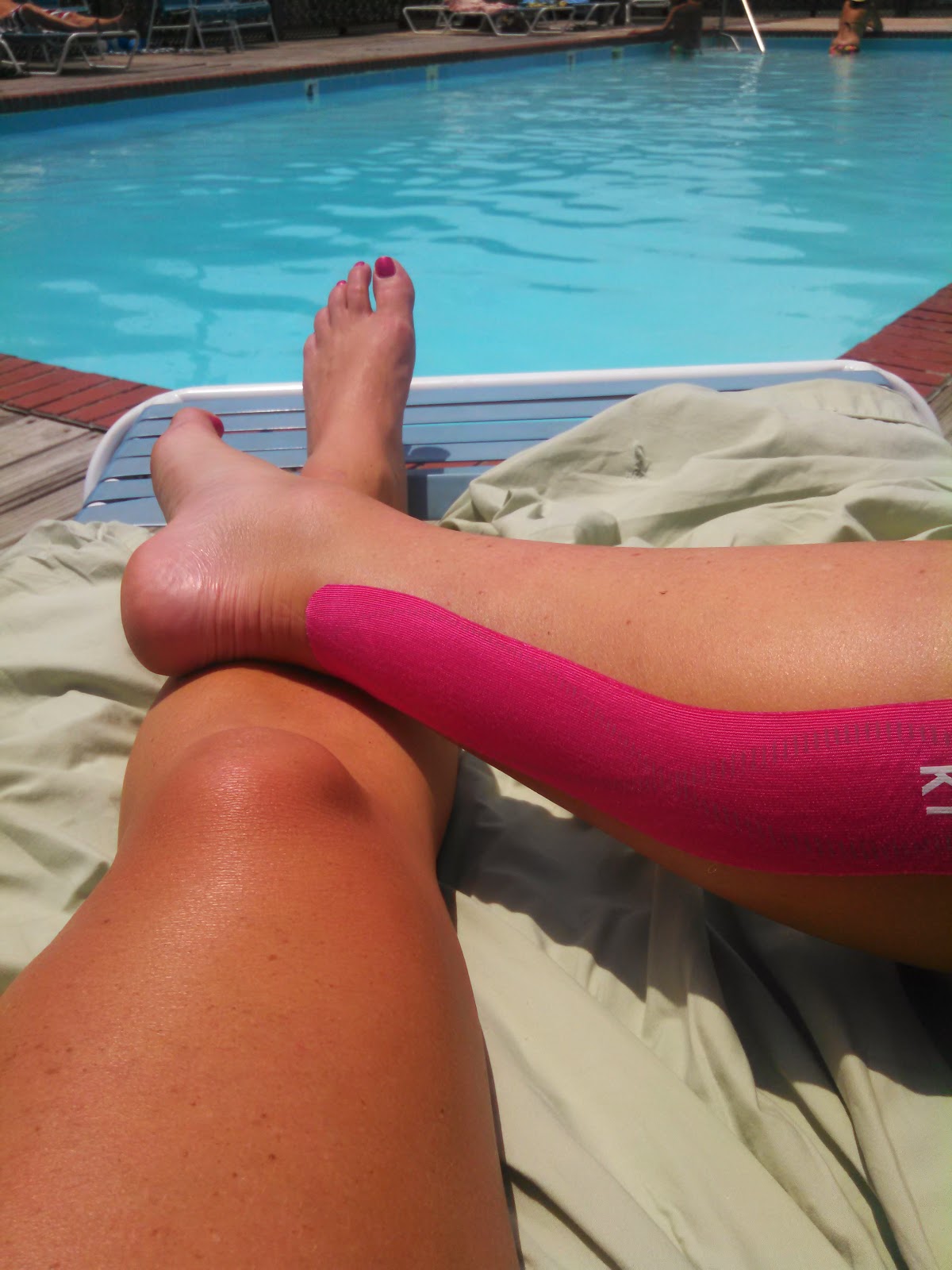 Saturday: June 14
Blueberries. This week I added two bike sessions, including the Tour de Blueberry in Burgaw, NC. I nailed the ride - 42 miles with a purposeful transition walk afterward. Then I did an ambling transition walk with Sunshine and Honey Spice in downtown Burgaw for the Blueberry Festival. We taste-tested eleventy blueberries from different farms and I left with a flat of blueberries from Ivanhoe, some blueberry preserves and a blueberry muffin. 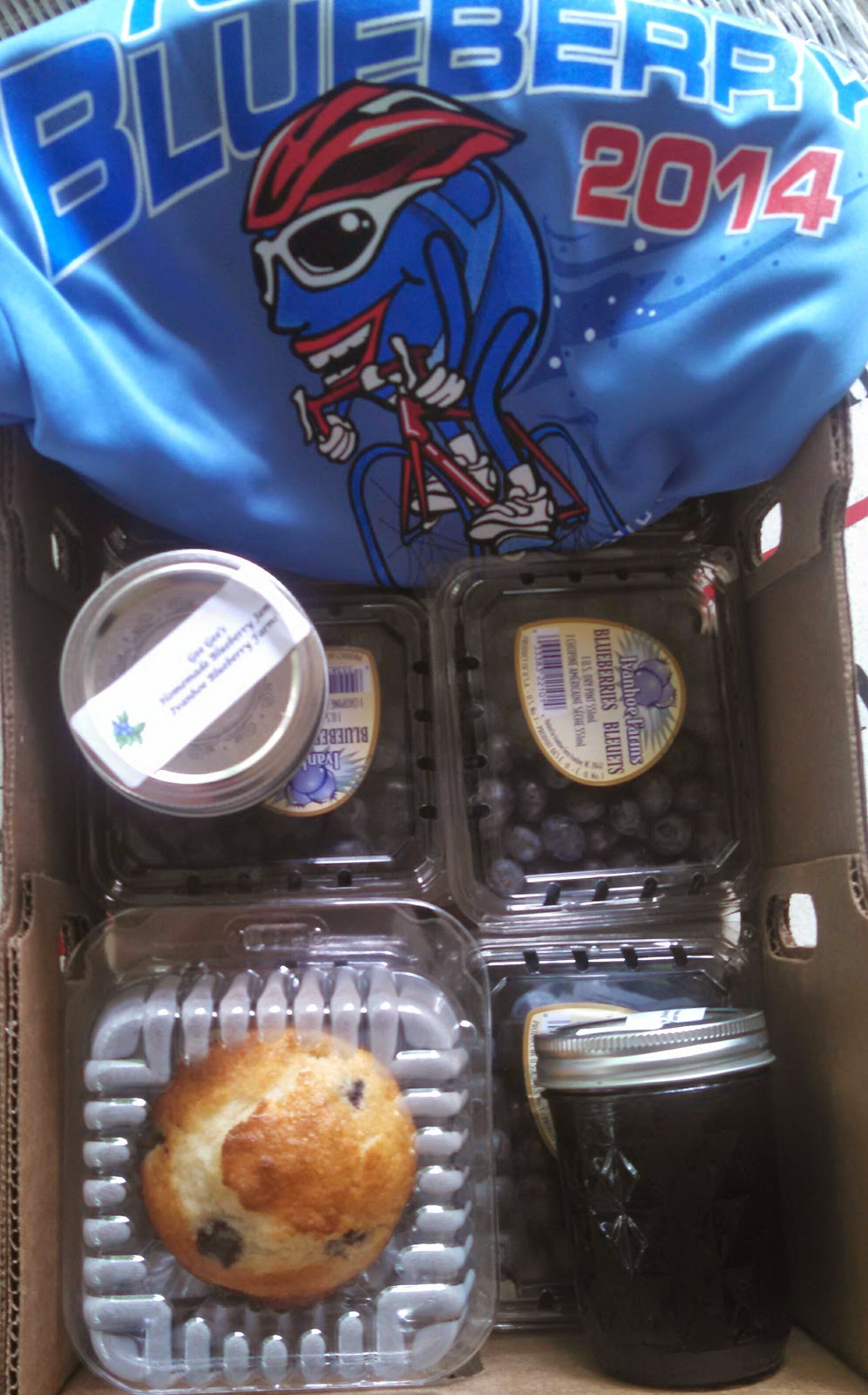 We're at the three week mark. My leg is blue but my mood is not.  The swelling is down but there is beautiful blue bruise around my ankle and up to my calf. It's not pretty. 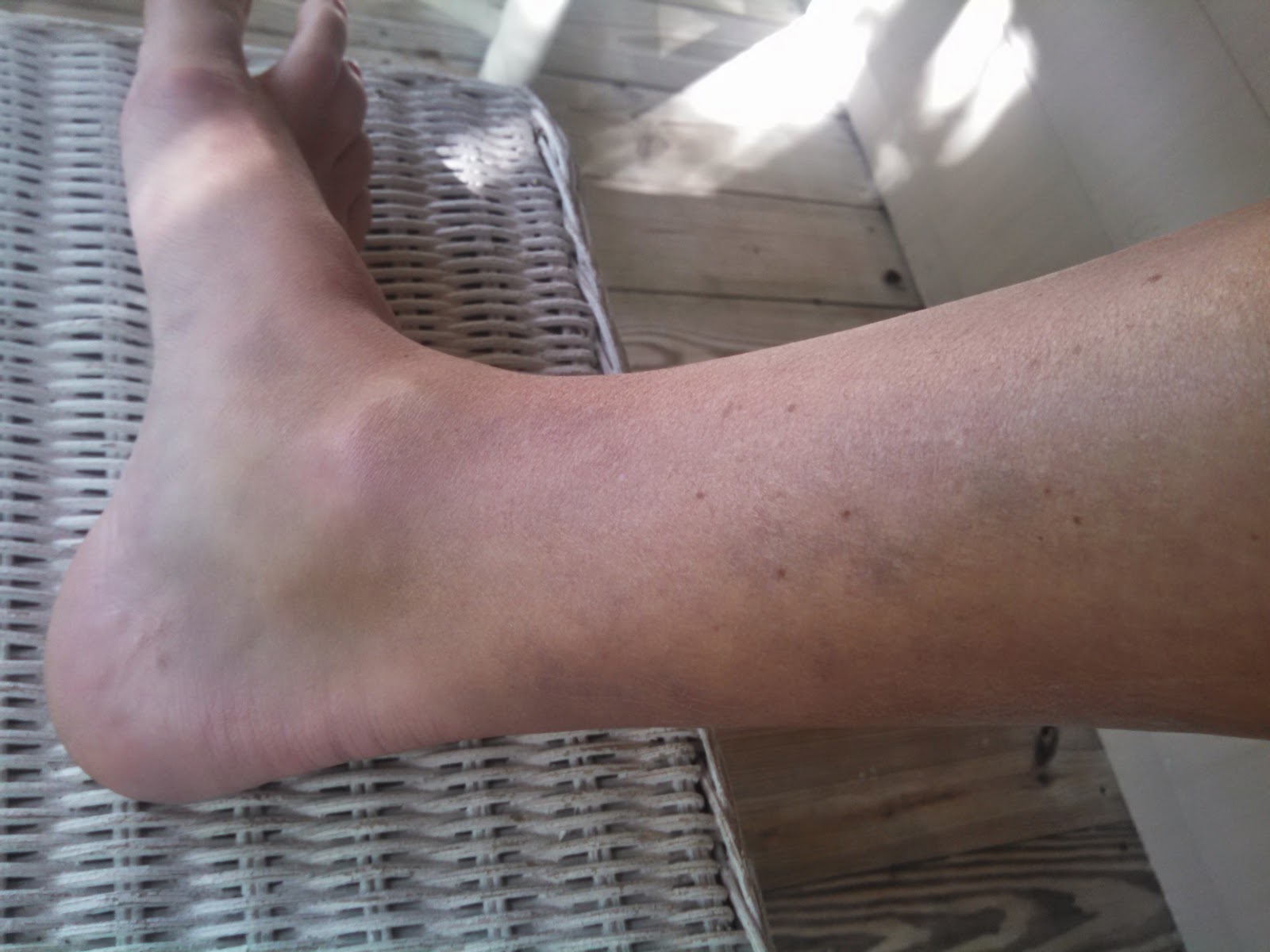