My second race in May was the Clemson sprint triathlon with my niece Lydia! Way back on her birthday in January, I asked if she'd do the run portion with me. She's been running for a few years and has had great 5K races in the past. We trade texts from time-to-time about workouts and runs and we share music mixes with each other. Plus, she was the only student in middle school asked to run on the high school cross country team! So, naturally, I wanted her on my team.


The long weekend was a blast. We traveled by motor coach - borrowed from our cousins, Kipp and David. We stopped in Simpsonville, S.C. to visit with longtime friends Todd and Jennifer and then headed to Central. We arrived on Friday afternoon and shortly thereafter went to scope out the race site. Ace, Rod, Dottie and I headed to the Clemson YMCA. Later, Karmin and I took off to Lydia's school to pick her up from volleyball practice and after that, we piled back into several cars to hit packet pick-up and pre-race pizza! Yum!

That evening, Lydia and I coordinated race outfits and talked about race jitters. We made a plan and the next morning, Ace, Rod, Dot, Lydia and I slid into the mini-van and headed to the race site. It was Rod's and Lydia's first triathlon experience so we did the normal walk-through: we headed to transition to find our spot in the bike racks, we headed over to pick-up the chip, we bypassed the long line at body-marking and marked each others arms and legs. Plus, we wrote DOUBLE TROUBLE on our forearms. I donned my wetsuit and we were ready to go!


Our cheering section was in place and ready to spur us on. Dottie, my mom-in-law, was Ace's apprentice for the day. She spent much of her time shadowing him in his role as GAS [gear and support] man. She learned how to body mark, where to apply body glide and how to transport bikes, bags and bites to eat. Plus, she invented the BEST catchphrase of the day. It was great to hear her shout: Draft off Jesus! several times during the race! 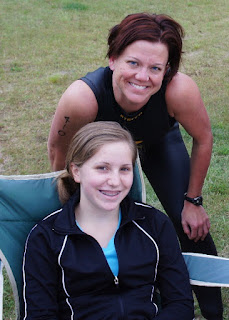 The race was great - I was pleased with my own performance and even more excited about Lydia's. She had an amazing run.  My swim was great: calm waters and fairly uncrowded (despite being lumped in with all the females 39 and under,). My time in the water was 14:28 - right on target. My least favorite part was the swim-to-bike transition! We had to run up a steep hill and around behind T1 to get to our bikes.


My bike ride was so much fun. My original goal was 35 minutes, but on the course drive-through the day before, I switched it to 45 minutes because of the hills. In the first few miles, I was nervous. I couldn't catch my breath and the first hill was tough. I knew there were harder hills to come! But, by mile three, I was in a good zone. I passed a few people and by the time I got to the steepest hill I knew I could make my goal. On the next downhill, I reached an all-time high: 34.7 mph! At that point, I realized I might be able to make the 35 minute mark! My time: 37:05! I was pleased that I pushed it as hard as I could. I was also pleased to hand-off the chip for Lydia's run!


Lydia was great - she ran the entire way (which was amazing because of the steep hill she had at the turn-around) and she had enough for a kick at the end. She was disappointed at first because our two timers (Ace and Rod) has misjudged the clock. When she finished, they announced that her time was about 31 minutes. Her goals was to finish in less than 26! We found out later that her official time was.....wait for it.....27:26!!! Four minutes faster than her unofficial time. 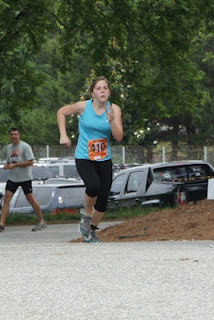 We finished fifth overall in the relays and I think we were the first all-girl team across the line. The other teams were co-ed and didn't count. My favorite part of the race might have been on the way home. Lydia and I shared her iPod and danced in the back seat of the van to Pink. There is nothing like adrenaline and pride and music to make me giddy.

We had a huge grill out that afternoon. Marina helped me hula hoop, I watched Jessica make an amazing tee shirt quilt and Lydia and I looked at pix from the race. Later that evening we had a NERTs tournament and I watched a highly dangerous game of spoons. One of the best tri weekends, EVER!